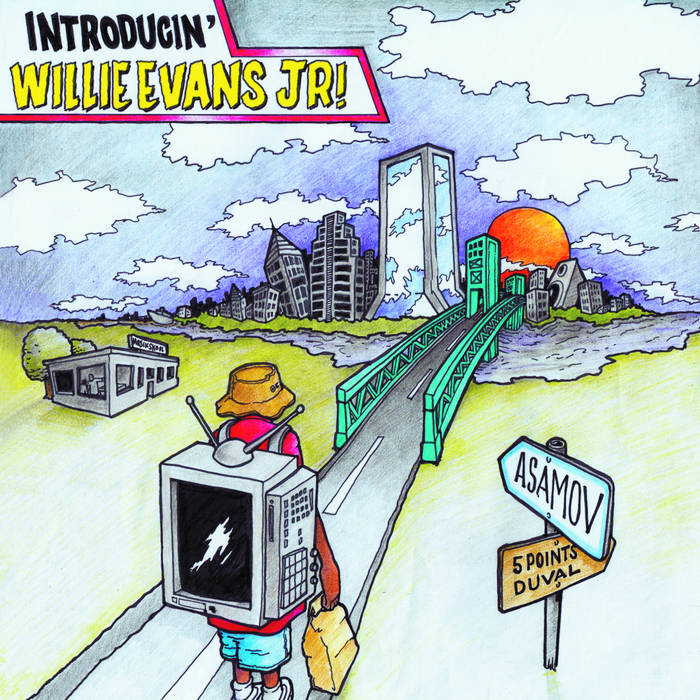 mnelectric One of my favorite albums of all time. An amazingly produced and written album. I seriously believe Willie Ev is a pioneer in a new sound of hip hop. I have never heard beats or rhymes delivered like this before. Ever.
Favorite track: Mega

Willie Evans Jr.
Willie Evans Jr. is forging a reputation that easily outsizes his average joe moniker. First as a member of Jacksonville’s well-received Asamov crew (now known as The Alias Brothers), then on the boards for The Perceptionists’ album and most recently for remixing Aloe Blacc’s “Good Things” into his ‘Billy Lotion’ project, Willie Evans Jr. seems determined to be up-and-coming no more.

Introducin’ finds Willie taking most of the lyrical duties upon his shoulders and unlike MF Doom, to whom he bears a striking vocal resemblance, keeps you engaged with his common sense approach to life and hip-hop with a touch of quirk. Willie wisely puts his production experience to good use and makes each track as lively as possible sprinkling in a little blues and shoegaze whimsy for variety compared to Doom’s gloomy, sparse productions. But there’s a certain Ghostface-ness to Jr. as well. The random thoughts glued together by an unseen theme with injections of off-beat humor (like the SNL “ad wizards” reference or faux-sympathy for critics, “They’re just doing their job, but their job f*ckin’ sucks” on the excellent title track, “Introducin'”) reek of Ghost. While lacking some of that affable charm, Jr. goes for the offbeat gusto with an air of confidence that makes the listener trust wherever he takes you.

The whole vibe of Introducin’ is best expressed on “Nerd English,” which stands in opposition to the gangster posturing in many rap songs. Willie calls out “college graduates acting like crime bosses” on the hook, “It’s okay if you just workin’ 9 to 5, my boy/Acting like you in the streets ain’t fly, boy.” The rest of the album doesn’t take such obvious jabs at the status quo, but Willie subtly shows he’s against the grain on songs like “CyberSheik” and “Moon Foot” as he gets intergalactic and on “Take 2,” a rapper love song that doesn’t make you cringe at its stupidity. He admits the difficulty of being vulnerable in a rap song while being completely bare of bravado in describing the undoing of a relationship.

With his Alias Brothers in tow on “A$amov,” Willie still runs the show overall and does a great job of introducing himself to those who didn’t know he’s the one to watch.